Thanks to the huge overload on my head due to all the events that were going to be held at the same time on the same damn day, (Hemorrhaging money: Part 1) things were changed up a bit. And by “changed up a bit” I mean, by the end of the day, I had a fork up my throat pinning me against a wall made of Aerospace grade aluminum.

Don’t worry, it’s just a metaphor. So let’s see how the plans changed up.

Somehow I managed to make the wild boar agree on a morning movie show. By the end of planning, a total of four members decided we would catch up on the 10 am-show. We were going to watch ‘Captain ****’. It would take about an hour for us to reach there by bus.

There was going to be me, the wild boar, the bear, and the rabbit… until a fifth member came along. No, not the chicken, let’s just name this guy Mr. ‘X’.

I would have given him another animal name, but this is the first and last story that he’ll be included in. At least I hope he doesn’t come up again any time soon. Mr. X was the wild boar’s idea.

X was an old but not-so-friendly buddy. I and the wild boar were on our way to another bus stop from where we would meet the rabbit and the bear to aboard another bus (BRTS) when the wild boar decided that it would be fun to call X and make him a bit envious.

I looked at the wild boar intently, “So?”

“You’re a pain, you know that?” I replied after a moment.

So for the rest of the journey to the mall, the original four of us were together and Mr.X was a little behind. He kept calling the wild boar for current status on our location, which was irritating to all.

At one point the wild boar said, “X is a bit unresponsive with the environment, if something happens to him, then it sure is gonna be on our heads.” The three of us stared at him for a while, then exchanged glances.

“On YOUR head… it’s going to be on your head,” I corrected him. The wild boar started to protest, but I cut him off, “You called him in the first place. Your funeral.”

The bear who was quiet for a long time asked, “Anyway, how is he coming here?”

The wild boar replied as though a matter of fact, “By autorickshaw.”

We again turned and stared at the wild boar. This time for much longer. “That’s going to cost more than three times the price of the movie ticket.” The rabbit said slowly. We all burst into laughter, grabbing attention of the other passengers on the bus.

Upon reaching the movie theatre in the mall, all four of us bought ticket seats.

I don’t wish to reveal the exact numbers that we spent on tickets and so on but still would like to give an idea of it. So let me link it this way… In India, we have a street delicacy known as ‘Vada Pav’. Its price may range from 15 to 20 rupees depending on the so-called standard of the food stalls.

For example, if it costs 15 rupees by the roadside, a small restaurant with some chairs and tables to sit may charge 20. Anyway, the point is, keep the value of a vada pav in mind, every time you read my upcoming stories… if I actually write any.

So, the movie ticket cost about 7 and a half vada pavs for each of us. At the very same time, the obnoxious kid, X called and wailed, “Buy 1 ticket for me too! I’ll be there soon! Please!” Jesus was he annoying. We bought it for him…separately.

While waiting for the doors to open, we spent our time in the washroom. Not to adjust our hairstyles but to perform some… cool stuff. And by cool stuff, there’s an example below.

I have the entire shooting with me, but it would be better if I just keep it low and swaggy. Anyway, I did it because I thought it was cool and even felt I had the position like this dude here (below)… but of course… I was better of course.

The movie and the INTERVAL

Everything went on fine. The movie was a little crap but never mind. The hitch came when it was the interval. English movies, as anyone knows, do not usually have “intervals”. But the movie theatres made their own interval for the movie so that we could get a walk out and get some ourselves some overpriced carbonated drinks.

The way movie theatres charged for the edibles was like a mafia, no doubt about that.

We bought ourselves some hot dogs and drinks. The price of a drink was about 10 vada pavs… yup, more than the ticket price itself.

Anyway, we did have a good time. I had some unfinished business (not exactly business, but let’s just leave it right there) to complete back at home, but the wild boar and X wanted to have lunch in the mall. The bear and the rabbit were idle without a clue of what to do.

So while X and the wild boar stayed back for lunch, the rest of us came back to our respective homes, which took another hour. After my… business, the bear and the rabbit called up to have lunch in another restaurant.

Now, it wouldn’t be much of a problem if we’d gone to some street side restaurant where people felt free to spit anywhere they wanted, but we decided to go to a little bigger restaurant. If that wasn’t already bad enough, these two animals had brought a negligible amount of cash compared to the bill that came later.

Quite unfortunately, I had brought a little more amount. I had to cover up the bill with an amount worth about 26 vada pavs. That was almost 3 times more than how much these animals each paid!

Honestly, the day sure was amazing. I enjoyed it. But later when I was alone and retraced my purchases and waste, I realized that money had slipped through my fingers faster than a blink of a toddler’s eye. If I recall right, I’d spent about 80 vada pavs on one single day… probably more though.

At least the rabbit awarded me for paying the bill with the bill itself, in front of the restaurant. Have a look below… and until next time! 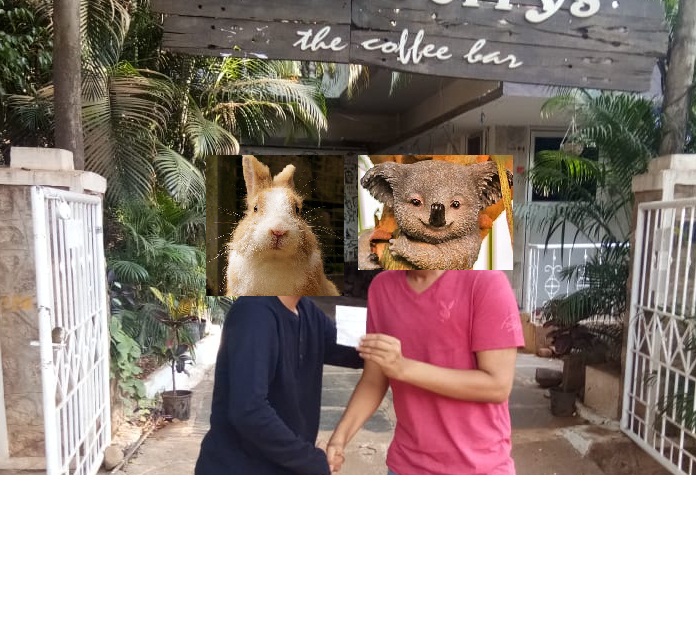 Hi there! I'm an 18-year-old dude who loves to travel. Well, still too young for that, but I travel around whenever I get a chance- and I never miss out writing on any of 'em! Being experienced in the writing world, I also write reviews of writing agencies and companies.

The world finds me strange…

Or maybe the world is… who knows?

Well, feel free to explore this chunk of the internet to see the world through my eyes

The world finds me strange…

Or maybe the world is… who knows?

Well, feel free to explore this chunk of the internet to see the world through my eyes